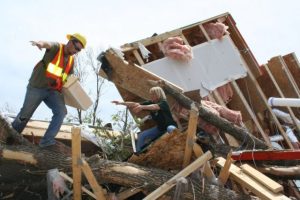 Hurricanes, tornadoes, wildfires, floods, and earthquakes all cause extensive damage that quickly overwhelm local, state, and government resources. In response, states that have enacted Good Samaritan laws to shield architects and engineers from liability can call upon them to help. But at this time there is no comprehensive federal law and state laws vary widely, leaving critical gaps in coverage.

In September 2004 Hurricane Ivan struck the Gulf Coast. Volunteer engineers began to work in the Florida panhandle and enjoyed the liability protection afforded under Florida’s Good Samaritan law. When teams of engineer asked to work across the border in Alabama, they were declined because Alabama had no such law. A few months later, Hurricane Katrina struck and the passage of a Good Samaritan law to protect architects and engineers became a top priority and was eventually passed into law.

In the aftermath of 9/11 scores of design professionals requested to work in New York and Pennsylvania, neither of which had Good Samaritan Laws. In response, Pennsylvania passed a law limiting liability, but New York did not. Now that Superstorm Sandy has devastated much of New York with flooding, calls are being renewed to finally pass legislation.

According to a NSPE brief, Good Samaritan laws provide protection from liability resulting from, “personal injury, wrongful death, property damage, or other loss caused by a professional engineer’s acts, errors, or omissions in the performance of voluntary engineering services. Such laws eliminate the liability deterrent that may inhibit engineers from providing voluntary services.”  However, “the immunity is removed if there is wanton, willful, or intentional misconduct, ensuring protection to those who are using the engineering services.”

At the federal level the 1997 Volunteer Protection Act (VPA) offers immunity from civil liability for volunteers serving nonprofit organizations or government entities.” But there are major flaws with the VPA. States can opt out or put whatever limitations they desire and the Act only limits third party suits, while allowing lawsuits by the government and non-profit sponsors.

In 2007, H.R. 2067, the Good Samaritan Protection for Construction, Architectural, and Engineering Volunteers Act, was sponsored by Congressman Dave Reichert (R-WA).  Since its introduction, the bill has stalled in different committees and waits for a vote.

There are important steps you can take to limit your liability if you volunteer your engineering or architectural services after a disaster.

First- understand the parameters of your state’s specific Good Samaritan law. Each state is different. Originally, Alabama’s Good Samaritan law only limited liability to design professionals for the first 30 days after a declared emergency. With extreme damage, 30 days is not enough time, so the law was amended in 2011, extending coverage to 90 days. Other states require you to be specifically licensed in that state and only work under direct supervision.

Thirdly- protect yourself from the disaster of a lawsuit. Design Professional’s Liability/Errors and Omissions Insurance is a must. You cannot rely on your state’s laws or the kindness of disaster victims if your actions, through no intent of your own, cause them harm.